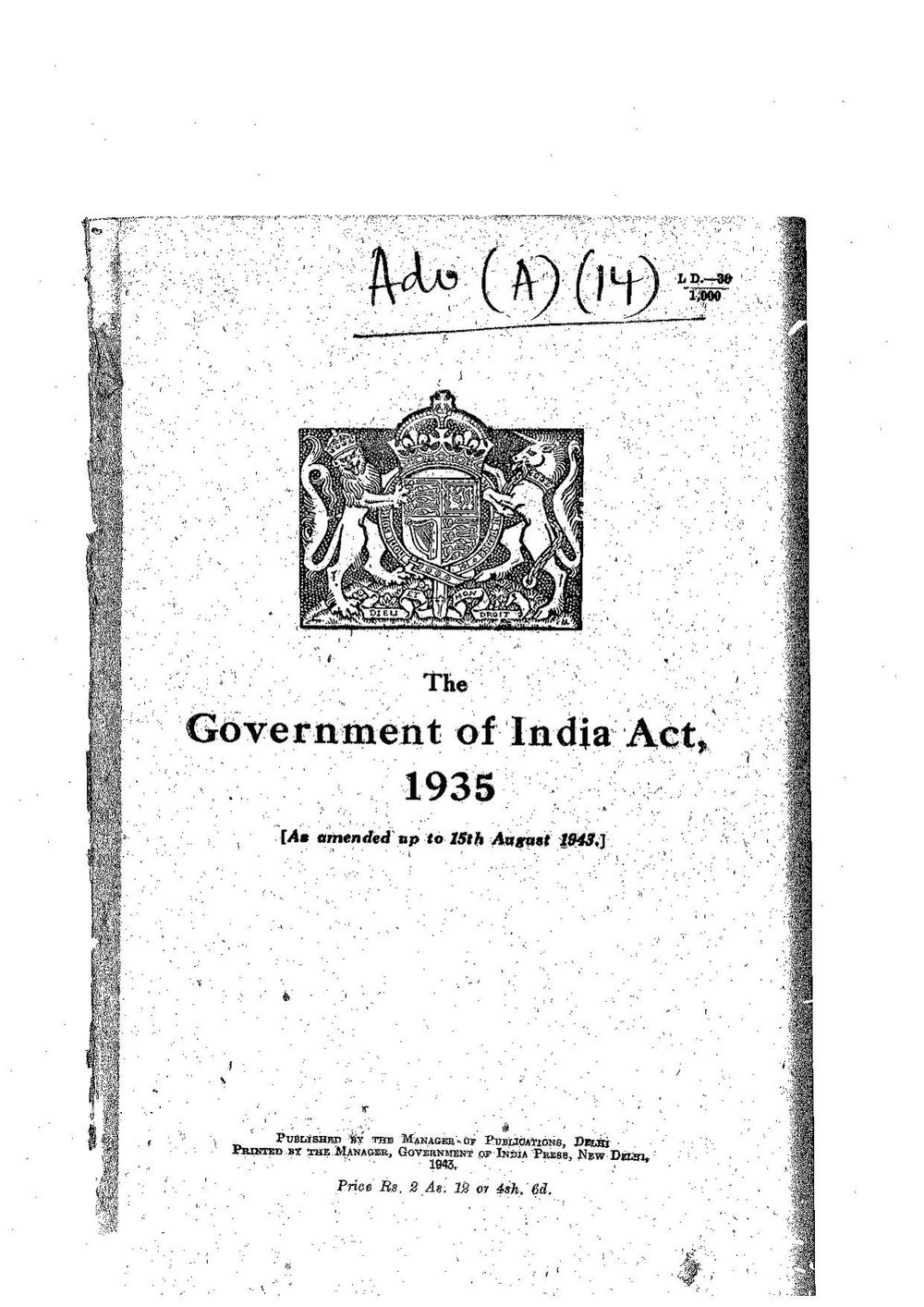 The Government of India Act, 1935 was passed by British Parliament in Aug 1935. With 321 sections and ten schedules, this was the longest act passed by British Parliament and was later split into two parts, one part was central and the other part was the provincial. The Round Table Conferences could not achieve their objective and thus failed. However on the suggestions of Round Table Conferences white paper was issued in 1933 and efforts were started to make the constitution of India. A committee was setup under the chairmanship of Lord Linlithgow, the viceroy of India, to consider the recommendations of the white paper. The report of the committee was published in 1934 that was contained in a bill of law. The report along with the bill was passed in the British Parliament. After the Royal assent the Act was enforced in the country as Government of India Act 1935. The Government of India Act, 1935, laid down a federal form of Government for India. The Government of India Act, 1935 derived material from four key sources viz. Report of the Simon Commission, discussions at the Third Round Table Conference, the White Paper of 1933 and the reports of the Joint select committees. This act ended the system of diarchy introduced by GOI Act 1919 and provided for establishment of a Federation of India to be made up of provinces of British India and some or all of the Princely states. However, the federation never came into being as the required number of princely states did not join it. The GOI Act, 1935 contemplated the establishment of an Indian Federation composed of the Governor’s Provinces and the Chief Commissioner’s Provinces in British India and such of Indian States, as may voluntarily accede to it.

The Act played a key role in the drafting of the Constitution of India, 1950. Significant chunks of the Constitution, particularly the administrative provisions, are borrowed from the Act. This had led to charges made in the Constituent Assembly about the Constitution being ‘foreign’ and unoriginal. Most scholars view the Act as a significant development in India’s constitutional and political history and agree that it was informed by a need to protect British interests rather than promoting self-government in India. Scholars like Andrew Muldoon have argued that the Act was arguably the most significant turning point in the history of the British administration in India. He further argues that the Act was a means of ‘continuation of the British control of India, and the deflection of the challenge to the Raj posed by Gandhi, Nehru and the nationalist movement. J.A. Gallager  in his Ford lectures on ‘ The Decline, Revial and Fall of the British Empire’ takes a similar view and states that the ‘Act was designed to revise the workings but not weaken the realities of British Power’.

The basic features of the Act were: (1) All India Federation; (2) Dyarchy in the Centre; (3) Provincial autonomy; (4) Safeguards provided in the Constitution to the responsible Government in India.

· The Government of India Act, 1935 shows the dominance power of the British Parliament or its superiority.

· This Act had proposed to establish an All India Federation and the Federation should consist of provinces and Princely states considering both as one unit.

· A Federal court was established after the recommendations of this Act. This court was introduced after two years of the passing of this Act, i.e., 1937.

· This Act provides the recommendation for the establishment of the Reserve Bank of India to control the regulation of currencies and credits of this country.

· After the establishment of this Act, the Council of India that was established by the Government of India Act, 1858 was abolished.

· Muslims, Sikhs and others except the depressed classes were provided separate electorates after the implementation of this Act.

· This Act gave Governor the critical emergency powers that were only enjoyed by him.

The Act proposed to establish an All India Federation which would comprise of British India Provinces and Princely states. The terms on which a state could join the federation were mentioned in the Instrument of Accession. It was at the discretion of the state as to whether they wanted to join the federation that was given by the Government of India Act, 1935. It had been proposed through this Act that if princely states were entitled to half of the state’s seats in the upper house of the federal legislature then the federation of India would come into existence. The part of the legislation that had not been implemented earlier was implemented after the first election under this Act was held. This legislation came into force in 1937 two years after the establishment of the Government of India Act, 1935.The approach to form the federation and implement provincial autonomy paved the way for the division of subjects between the Centre and the Provinces. The division of subjects that were given by the Government of India Act, 1919 was revised and added some more subjects in it by this Act of 1935 and included three lists. These were: (1) Federal List, (2) Provincial List, and (3) Concurrent List.

1. The Federal List contained in all 59 items which were exclusively the federal subjects. The more important of these subjects were Defence, Foreign Relations including relations with Indian states, Extradition, Railways, Posts and Telegraphs, Foreign Trade, Shipping, Navigation, Explosives, Arms and Ammunition, etc. The matters which were of all-India interest and needed uniform policy were included in this List.

2. The subjects enumerated in the Provincial List were within the exclusive jurisdiction of the Provincial Legislatures. This List contained matters of local interests such as education, land revenue, public health, forests, irrigation, industries etc.

3. The Concurrent List consisted of 54 items on which both Federal Legislature and Provincial Legislatures were competent to make laws. Few of the subjects under this list are- marriage and divorce, wills and trusts, bankruptcy etc.

By this Act, dyarchy system was adopted at the central level. There were two categories of federal subjects:

Reserved Subjects– The subjects that are mentioned in this category of federal subjects were to be administered by the Governor-General on the advice of the Executive Councilors and the Executive Council could not exceed its limit of three members. Religious affairs, defense, administration of tribal areas and external affairs were included in the reserved subjects.

The introduction of Provincial Autonomy was one of the reclaiming features of this Act. Simon Commission recommends adding this part in the Government of India Act, 1935. Provinces were not having an Executive Council and Reserved Subjects earlier but this legislation had added these subjects. This Act discontinued the system of dyarchy or the system of division of subjects in ‘Reserved’ and ‘Transferred’. The Council of Ministers has got the right of administering on provincial subjects except for law and order. The power to administer on the subject of law and order was in the hands of the government who was having powers superior to that of the Council of Ministers.

After the commencement or the starting of this Act, the Centre’s hold over provincial subjects was reduced. The ministers could not freely exercise their power of running their departments. The dominating power of Governor through which it dominates over the ministers was rarely used by him. The governor on the advice of Viceroy took total control over the provincial government at the time of political breakdown.

Safeguards provided in the Constitution

An important feature of the Government of India Act,1935 was the introduction of elaborate safeguards in the new Constitution so as to make the functioning of a responsible Government in India a real success. These safeguards, according to K.V. Punish were “the restrictions and limitations imposed either on the competence of, or the exercise of the powers by the Government of India. They could roughly be divided into two categories-

1. The safeguards primarily in the interest of the British Government ( Reservations defence, external affairs, finance, exchange, currency, coinage, commercial discrimination, All India Services , RBI and the Federal Railway Authority); and

While it had become unusual for British Acts of Parliament to contain a preamble, the absence of one from the Govt. of India Act,1935 contrasts sharply with the 1919 Act, which set out the broad viewpoint of that Act’s goals in relation to political development in India. Indian demands were by now concentrating on British India achieving constitutional equality. This Act reveals that the British government equipped itself with the legal instruments to take back total control at any time they considered this to be desirable. However, doing so without good reason would totally drop the credibility with groups in India whose support the act was intended at securing. The act gave arbitrary powers under the phrase of ‘safeguards’ and ‘special responsibilities’ to the governor to act ‘in his discretion’ in matters like summoning of the legislature, appointment of the ministers, giving or withholding his assent to bills passed by the legislature or exercise his individual authority to issue ordinances valid for six months or enact governor’s act.

Constitutional development can be traced back to about 1861 Act or if we go back, yet, to the Regulating Act of 1773 in India. But, the Constitution of India with or without some modification adopted some important provisions from Act of 1935. All India Federation including all provisions under the paramount of the British Crown was established with this Act, and the same was the aim of our Constitution. The   restlessness of authoritarian and responsible government, called the act of 1935, fell far short of Indian national aspirations. British colonialism still resolute to uphold its control over India looked for novel safeguards in communal and conservative elements. The proposal for setting up of a Federation of India did not materialize because the act proposed that federation could come into existence only if as many princely states (which had been given the option to join or not to join) were entitled to one half of the seats in the upper house of the federal legislature. Due to this, Central Government of India continued to be governed by the provision of Act of 1919. However some parts of the GOI Act 1935 came into force, for example: The Federal Bank (Reserve Bank of India) and the Federal Court were established in 1935 and 1937 respectively. The other parts of the Act, particularly provincial Autonomy, came into force on 1stApril 1937. The first elections under the Act were also held in 1937.