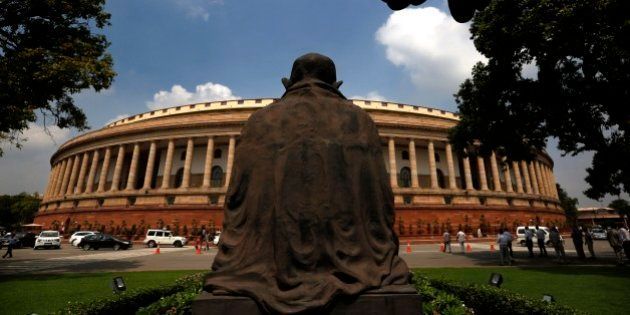 India is a democratic nation. The preamble to our Constitution itself declares to constitute India into a Sovereign, Socialist, Secular, Democratic and Republic country. The term ‘democratic’ indicates that the Constitution has established a form of Government which acquires its authority from the will of the people. The term democracy in its broadest sense holds, in addition to political democracy, also social and economic democracy.[1] Every ruling government at the centre and state thrives to work in accordance with these facets of democracy however sometimes they may not be knowing their consequences reaching people at large and may not work in accordance with the will of the society, and there comes the role of the opposition who ensures that the lacuna is brought in before the ruling government so that both together can ensure the true character of democracy. The Constitution of India mold a unique blending of the parliamentary and presidential form of government, however, the features of parliamentary is predominant. The existence of an institutionalized political opposition is a sine qua non to the better functioning of a parliamentary democratic structure.[2] The political party which is out of majority power classifies and assembles itself for opposition and such arrangements which they make have sweeping and unforeseen consequences for the membership of its government when it comes to power.[3] The Leader of the Opposition leads the opposition in either houses of the Parliament whose position is a statutory post where ‘the Salary and Allowances of leaders of opposition in Parliament Act, 1977’ defines under sec.2 who a ‘Leader of Opposition’ is.[4] Though their roles or functions are not found in any rule or even the Constitution itself, its presence is inevitable. The opposition observes the activities of the ruling government and scrutinizes  their functioning and if found working undemocratically, brings the government into right track through reasonable criticism expressing their dissension and offers constructive suggestions to improve the deficiency of the government.

Trends Of Opposition In India Since 1947

The trend that has been and is existing in India is actually towards the formation of a multi-party system which has its effects under the ambit of parliamentary activities, understanding and taking up their  role diligently working in the interest of the people thereby upholding the democratic nature of the country.[5]

During the Initial years of our Independence and after, the Congress Party was dominant at the national and nearly all state level having in their favour the legacy of the freedom struggle, strong leaders, and strong party association. Congress held all the three grounds of centre, left and right and all the debates and conflicts occurred not between Congress and the opposition but within the same party. The proportion of opposition parties were minimal who were not politically structured enough to play the key role of efficient opposition. Congress since the 1967 election no longer dominated the seats in the Parliament. This was also the rise of two counter trends – the emergence of the Hindu nationalist and of regional parties as alternatives or opposition to Congress and the split between Indira Gandhi and the Congress Party. [6] But this was just the emergence of opposition and it didn’t really held a strong influence in their say. India’s first non-congress government was elected as a fierce reaction to the National emergency in 1976 but still didn’t last long.

However, in the present scenario, there is no opposition in the Lok Sabha which becomes a grave concern as there is no party which has 10% of seats which shows the inefficiency in representing the interest of the minor’s aspirations while UPA occupies the seat of opposition in the Rajya Sabha.

Importance of The Role Of Opposition In Democracy

The importance of the role of the opposition in a democracy was also discussed in the Constituent Assembly Debate wherein, Mr. Z.H. Lari highlighted that in England, the Opposition is called ‘His Majesty’s Opposition’ and those words are enough to create the hollow in the minds of the electorate about the Leader of Opposition and his party has a role to play in the functioning to discharge and pointed out that an absence of efficient opposition would create a bad impression among subjects that the parliament is a mere imitation who doesn’t work in accordance with the democratic principles and thus opposition has to come into picture and point out the wrong doing of the ruling party.[7]

A petition was filed before the Delhi High Court recently to strengthen the institution of democracy and avoid politicization in appointing or recognizing mandatory post of Leader of Opposition at whims of Ruling Party, where the petition also highlighted the importance of the presence of opposition goes to the fundamentals of democratic process in the society to rule out any arbitrariness and favouritism by a ruling party.[8]

The role or responsibilities which the Opposition plays in a democracy are listed in bullet points:

· The parliamentary duty of the Opposition is to scrutinize and oppose the inadequacy of the Ruling Party’s functioning, and challenge, question and promote responsible and reasoned debate in the House if any insufficiency is found which pushes democratic discussion to a high level of political development and maturity.[9]

The importance of Opposition in a democratic country like India is a much required essential for a democracy to run efficiently. In the case of S. Satyam Reddy v. U.O.I, the contentions highlighted that the opposition is the most visible form of the struggle for stopping the power of the ruling government by constantly putting to test the policies adopted by those who are in power. Opposition takes a careful measure whenever there is something against the public at large. [10] But we find that the opposition in India has never been efficient enough. An effective opposition performs two functions in the set-up of parliamentary democracy, firstly it provides constructive criticism and correct policies and programme of the party in power and secondly is able to form an alternative government when the party in power goes out of the office, and looking at these functions we find that an effective opposition in this sense has not developed in India so far.[11]The efficacy of the opposition is so minimal that it becomes hard for a nation as big as India to rectify its undemocratic decisions in time with effective feedbacks and criticisms.

In conclusion, I would like to highlight two suggestions that I would suggest as a law abiding citizen of India -

[4]Sec.2. the Salary and Allowances of Leaders of Opposition in Parliament Act, 1977.