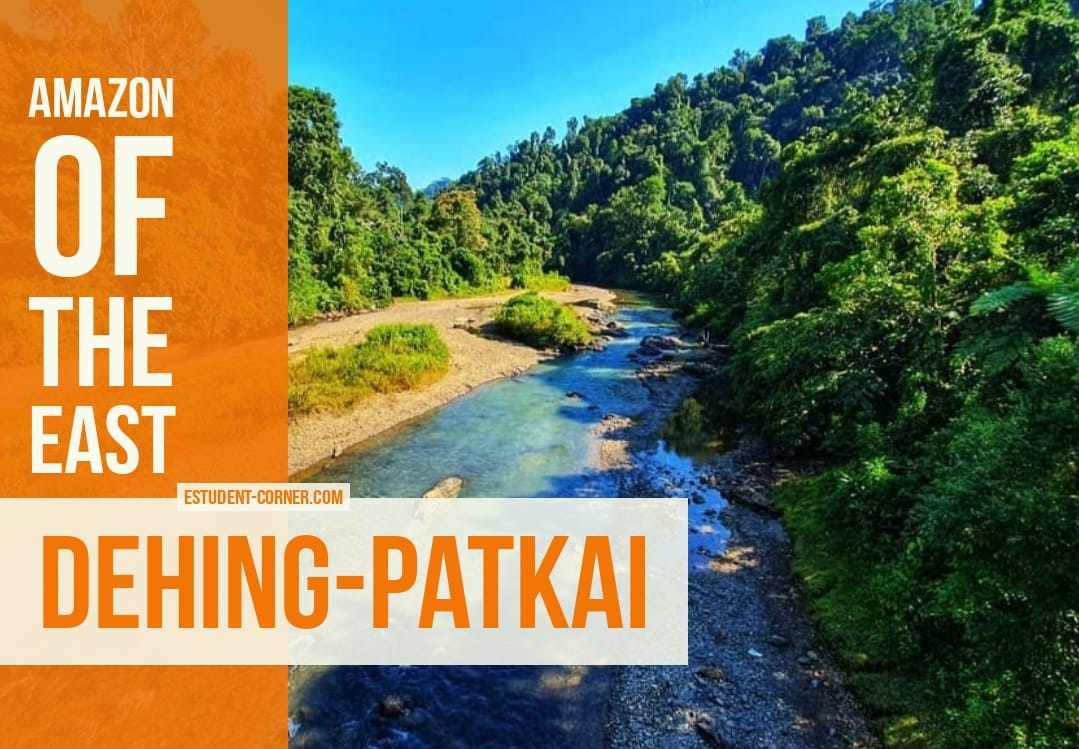 Dehing Patkai Wildlife Sanctuary is located in the Dibrugarh, and Tinsukia, District of Assam which covers an area of 111.19 sq km. It was declared a wildlife sanctuary in the year 2003 under the Wildlife Protection Act, 1971 which is also a part of Dehing Patkai Elephant Reserve. The Dehing Patkai forms the largest stretch of tropical lowland rain forests in India. It is also referred to as "The Amazon of East" as it covers a large area of thick rain forest existing in Assam. It comprises of Jeypore, Upper Dehing and Dirok. Dehing is the name of the river that flows through this forest and Patkai is the hill at the foot of which the sanctuary lies.

The Dehing Patkai forest has a rich ecosystem which has a distinctive appearance and structure dominated by its rich vegetation. The different trees of the rain forest includes Mekai, Dhuna ,Nahar, Samkothal, Hollock, Dimoru and so on. Dehing Patkai is considered to be one of the most vital places in Assam in terms of orchid diversity. There are around more than 100+ species of orchid. Dehing Patkai is home to 7 species of primates namely rhesus macaque, Assamese macaque, pig-tailed macaque, slow loris, stump-tailed macaque, capped langur and Western hoolock gibbon. This wildlife sanctuary is also home to globally threatened mammals like Asian elephant gaur, Himalayan giant squirrel, Porcupine, Crab-eating mongoose, sambar, barking deer, wild buffalo, Himalayan Black Bear etc.

The North-East India has witnessed considerable infrastructure growth which has led to socio-economic development of the region. Recently, the National Board for Wildlife (NBWL) has given permission to a proposal which recommended the usage of 98.59 hectares of land belonging to the Dehing Patkai Wildlife Reserve for the purpose of the extraction of coal by the Coal India Limited (CIL). The Coal India Limited was granted a mining lease year back in 1973 and since then the CIL has been mining in the area. That lease got expired year back in 2003 but the CIL applied to the Ministry of Environment, Forest and Climate Change for the renewal of the lease in 2012, which shows the gap margin of around 9 years in between. It comes to us as a shock that all the years in between from the year of expiry to the year in which the CIL applied for the renewal of their lease, coal mining continued illegally in the area. It is saddening that no action was taken against the CIL stopping them from carrying out mining until the renewal of the lease was granted.  It sought its clearance only in 2012 but it was rejected then. The CIL applied again in 2019 for clearance of 98.59 hectares out of which CIL was already carrying out mining activities in 73 hectares. The Centre gave the Stage-I clearance to the PSU major for 57.20 hectares in December 2019 with 28 conditions which included fines and action against responsible officers violating the Forest Conservation Act. The Assam Forest Department last month imposed a penalty of Rs- 43.25 crore on CIL for carrying out illegal mining activity inside the forest for 16 years since 2003.

The MoEFCC turned down its own stand by allowing coal mining in Dehing Patkai Wildlife Sanctuary and affecting the rich biodiversity of the forestland. In the April 7, 2020 meeting, R. Sukumar, Assam’s Chief Wildlife Warden and a representative of the local wildlife division for assessing the mining area stated that 57.20 hectares of the hilly forestland had already been broken up by the North-Eastern Coal Field (NECF) and the remaining 41.39 hectares was unbroken and that the matter of that area will be taken up for consideration after NECF submits a feasibility report.[1]The proposed area is on a steep hill slope which is a part of the Dehing Patkai Elephant Reserve which will result in a grave disturbance of the flora and fauna of the forestland resulting in an imbalance in nature.

The effective use of present resources to meet the needs of present generation without using the resources of the future generation is known as sustainable development. In managing sustainability, the development planners must have to align their thinking with the mission of sustainable development. The Centre has been trying its best to bring about developmental changes in North-East India which is also helping in the growth of employment rate. Projects like the one which we are talking about are at the cost of harming the rich biodiversity of Dehing Patkai which is home to a rich flora and fauna of Assam. The coal mining project with no doubt will help in providing employment to a large number of unemployed people in the North-Eastern region but infringing the biodiversity at Dehing is no way considered as a sustainable development project.

UNDERSTANDING THE ENVIRONMENTAL LAWS WHICH ARE GETTING VIOLATED

Protection of Biodiversity and Wildlife has always been a concern of the law makers in India. There are various laws which protect them from getting destroyed. The Indian Constitution itself has got provisions keeping in view of the importance of environment.

1. The Wildlife Protection Act, 1972 - The Wildlife Protection Act, 1972 was enacted on 9th September, 1972. It provides for the protection of wild animals, birds and plants. This act has got six schedules which gives varying degrees of protection. Following are the sections which are being violated under the coal mining project which got the permission to continue mining at Dehing Patkai-

2. The Forest (Conservation) Act, 1980 – The Forest (Conservation) Act, 1980 was passed with a view to check the growing deforestation which has been taking place in India on a large scale which has led to many ecological imbalances and led to environmental deterioration. The Coal mining activity which has been granted permission at Saleki region of Dehing Patkai Wildlife Sanctuary is in total violation of Section 2(iv).

Due to coal mining and associated industries, the components of the environment in the mine area e.g. land water and forest resources are constantly undergoing a process of change which is ultimately leading to an imbalance in the ecological system of different regions. Many forests are burned and are cut down for the purpose of various developmental projects which also lead to a homeless condition for the wildlife who inhabits there. The Coal Mining activity at Saleki will destroy the rich biodiversity of the region also making the elephants of the Dehing Patkai elephant reserve homeless . Join hands together and save Dehing Patkai!

I am looking forward in stretching this blog post even more with your help.